Yes, Your Issue is Divisive — Here’s How To Gain the Edge

The noisy discord in today’s digital townsquare means that no matter the apparent value of your project or proposal, it’s bound to be divisive to some degree. What might seem like the most logical, innocuous issues, sometimes even with obvious public benefits, still have strong potential to generate criticism.

In a social media-driven world, the anonymity of a keyboard has made it easy to make every issue a controversial one. Throw in the media’s competition for viewers/readers, and that controversy becomes ripe for headlines.

It is critical that organizations with issues and projects in the public arena be prepared to serve as a reliable resource for accurate information while proactively positioning themselves among credible third parties. If you let others define you or your positions, you’re asking for trouble. That’s your job.

When you’re dealing with a vocal public, everyone thinks they deserve a say in your issue. Success is about listening and educating the public to earn their trust (or at least the benefit of the doubt) while steadily boosting their confidence in your plans and priorities.

Here’s how you can get ahead of the issue by providing accurate information, leading the conversation and anticipating criticism before it dominates the coverage.

Even If You Don’t Think Your Issue Is Divisive, Operate as Though It Is

Divisiveness and rancor are a byproduct of today’s media and political landscape, but in Texas this poses a unique challenge. When anyone can publish an opinion with the press of a button, that opinion is quickly magnified and multiplied when paired with Texans’ fiercely independent streak.

All news travels fast. Bad news travels at light speed. It can spread like wildfire from Houston to Austin, Dallas to San Antonio, Amarillo to Beaumont. You need to be out in front of that spread, providing the right information in the right context, guiding the discussion and debate, and understanding the local nuances likely to influence the conversation.

The spectrum of people who are exposed to your issue based on algorithms, geolocation or viral social media trends is completely out of your control. Whatever merit your project or proposal may have, it will find criticism. The comments section will guarantee it.

We’re not saying there’s nothing to be done. Quite the contrary. Recognizing that the digital town square is divisive is key to understanding where its usefulness is. There are methods of deploying digital resources to earn public trust.

How Issues are Interpreted in Texas Depends on Where You Are

As distinct as Texas may be from other states, it’s unfair (and unwise) to see it as homogeneous. On the contrary, it is incredibly diverse. There are nearly 29 million people here living in wildly different communities, all of whom have their own ideas, principles and information sources (which we’ll come back to).

They all have completely different perspectives of social issues, as well as the business and industries that dominate their local economies and local politics. In reality, different regions of Texas reflect differences similar to those between different states.

Take the issue of casino gambling in our state, an issue that has been discussed for more than a decade. Urban areas are generally in support of legalized gambling; rural folks are often ambivalent or opposed.

Even within the largest metropolitan areas you’ll find strong and differing sets of opinions. None of them speak with the same voice, so meeting your opposition where they are is vital. Know who they are. Understand their rationale and what factors have the greatest impact on how they formulate their positions.

And keep it simple. You already know your issue frontwards and backwards. But if you try to explain every detail of your agenda, you’ll lose your audience. You have to go back to the basics and explain what it is that people actually care about.

Their familiarity with an issue may be zero. On a scale of 1 to 10, we need to get them to at least a 6 or a 7 so that they have an understanding of what an initiative is and an appreciation for why it’s important.

Engage and Enlist Others to Tell Your Story to Ensure Success

If you’re the only one talking about your issue, you already lack credibility, especially if you’re a stranger in town. Find others to help tell your story. A neutral third-party. An advocacy group. A knowledgeable nonprofit.

Keep in mind that it’s far harder to generate a supporter than it is an opponent. Supporters take a lot of care and feeding. Opponents grow on trees. In order to build support to counter your opponents, you need to be methodical and thoughtful. That’s what it takes to build trust.

And don’t write off the folks you suspect will be your biggest opponents. Sometimes engaging with them very early in the process to understand their position provides opportunities to find common ground and avoid a public dispute. Sometimes people simply want to be included in a process. If they read about it in the paper before being approached, their natural reaction is to feel threatened and take up a defensive position that will be far more difficult to resolve.

Being pragmatic and transparent on the front end can pay big dividends and avoid a lot of heartache.

Winning of Hearts and Minds Starts With Education

Gaining public trust isn’t an exercise in public relations. In fact, that’s a broken, outmoded term and approach. To be successful in the face of opposition requires a strategic educational campaign.

Here’s are the key elements that go into develop a winning strategy:

And you need to be constantly monitoring how your issue is playing among supporters and the opposition. Demonstrate transparency, answer questions, be THE resource for your issue.

Begin your new project or proposal by putting together a brief myth/fact sheet. This is a simple outline of “what are the facts?” and “what are the myths?” surrounding the initiative.

The opposition is fond of myths because they tend to be an easy way to take down a new proposal. These juicy tidbits sound just plausible enough to make them easily repeatable, even if they’re light on facts. They read it on Reddit. They liked it on Facebook. They fell into a rabbit hole in a dark corner of the internet.

You can counter them by saying these are the facts surrounding those myths. These are the answers to the most frequently asked questions about this initiative. It’s an opportunity to directly tackle questions that are top of mind among the target audience.

Here’s an FAQ sheet recently offered publicly from BlackRock to set the record straight on claims that the company was one of a number of institutional investors buying single-family homes. 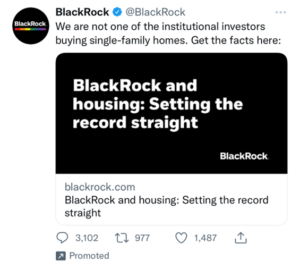 Don’t let those questions be answered by somebody who doesn’t know the story like you do. You’ve got to be prepared to be the expert resource for anything and everything related to your initiative. BlackRock made a strong move to defend its reputation.

Find Success and Overcome Division By Telling Your Story

Getting business done in Texas is a little like dancing the two-step: You have to know who’s leading and who’s following or else  you’ll look like a fool.

You want to be leading with an appealing story backed by facts — a story that people want to believe in and support. Demonstrate confidence, communicate and bring them along as a partner.

Lead and they will follow, but only if they believe they’re following an experienced partner that knows the path to success.